hy72ir6n49g5z831meqb Review: No Rest for the Wicca by Toni LoTempio • Bewitched Bookworms 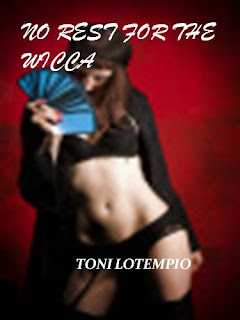 No Rest for the Wicca
(Goodreads, Amazon, Barnes and Noble)
by Toni LoTempio﻿
(Goodreads, Amazon, Barnes and Noble, Website)
copy provided by author in exchange for fair review
Book Description (from Goodreads):
My Thoughts:
No Rest for the Wicca follows Morgan, a former homicide detective turned supernatural investigator who hides the pain of causing her partner’s death behind a very tough and snarky exterior. While she isn’t exactly content exorcising ghosts and demons and settling disputes between the various supernatural beings that live side by side with humans in Central City, she believes this is her penance for turning to dark powers as a last resort and unknowingly killing her partner in the process. Of half-Wiccan and half-Voodoo decent, she doesn’t really have a strong hold in either world and just relies on her sensitivities to the spirit world to do her job.
When someone begins to target female pure blood witches and their bodies begin to show up ritualistically dismembered and with voodoo figures next to the bodies, Special Forces is called in and Morgan is asked to work along side sexy Inheritor vampire Cole St. John to bring the murderer to justice. While Cole (half-vampire/half-human) will go under cover as a teacher at a local college where every victim has attended magic classes, Morgan is an obvious choice to attend as a student undercover as well due to her Wiccan/Voodoo mixed heritage, as well as her experience in law enforcement. Morgan is reluctant to join the investigation until someone she loves unwittingly comes close to danger.
I love a good mystery. The clues are revealed at a great pace and they come from a lot of different sources. The story wasn’t generic or predictable. Toni LoTempio writes very lovely dialogue and is great about never having a character just give a large “info dump” of dialogue. Her descriptions of the scenery and situations aren’t overly wordy, so they don’t take you out of the story. There is a decent amount of humor in this book, especially in Morgan’s attitude and speech. And it makes Morgan much more fun.
The relationship between Cole and Morgan develops a little quickly, but it’s nice to see a relationship that isn’t too angsty.  Cole certainly takes a boat load of Morgan’s crap and attitude, and it makes you love him more for it.
Overall, I give this book a four. It’s a fun, sassy urban fantasy with a little splash of paranormal romance. There were a few instances of continuity issues, but they were very minor and they didn’t take away from the story. I definitely recommend this book to anyone who likes witches, hot vampires, and a good serial killer mystery.

Communing with the dead is an everyday occurrence for PI Morgan Hawkes. A half-Wiccan witch who can commune with spirits of those caught between worlds, Morgan uses her talents to exorcise the trapped ghost or demon as part of the Paranormal Investigation Squad – until a string of murders with a voodoo slant prompts the Special Forces Agency to ask for her assistance. Someone’s killing pureblood witches- and the SFA’s convinced Morgan’s heritage (her father was a voodoo priest) could be instrumental in solving the mystery. Teamed with dashing SF agent Cole St. John – an Inheritor Vampire that sets her blood racing – the two of them fight their attraction for each other as they race to stop a madman from unleashing a demonic force upon the world﻿. « In My Mailbox – Heather’s Post-BEA Redux
The Art of Forgetting: a review »

2 Responses to “Review: No Rest for the Wicca by Toni LoTempio”