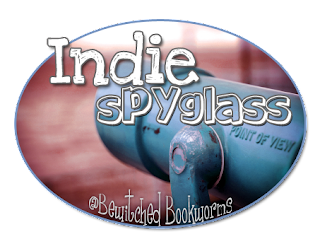 Welcome to a special edition of the Indie Spotlight. I have an extra special and super cute guest today, Silas the dog! And his owner Ken came along too because Silas can’t reach the pedals and drive with his head hanging out the window at the same time. I sat down with Silas and Ken a month after they returned from one heck of a dangerous journey through a parallel dimension.

Heather: Hi, Ken. I’m so glad you two could come over for a chat.

Ken: Hi to you too, Heather. Glad you wanted to see us today. It’s an honor. Silas thinks so, too.

*Heather leans down and pats Silas’ head, scratches behind his ears*

Heather: I’m really curious to find out what Silas thinks about the adventure that you two went on. And to do that, I have a top secret canine thought translator that will takes Silas’ brainwaves and turn them into words that we can understand. Sound good, Ken?

*Places canine thought translator collar around Silas’ neck, turns on laptop and launchs program*
Heather: Silas, when Wendy picked you out and brought you home, what did you think?

Silas: I was very happy. Very, very happy. So happy I almost peed myself. I jumped into Mother’s arms and licked her and licked her. I could smell the joy she felt when she petted me. I knew right there she would bring me to a place I belonged.

Heather: What is it, Ken?

Ken: Nothing. It’s just really…interesting to hear his “voice.” In a cool way.

Silas: I like the way you speak too, Father.

Heather: So Silas, you were talking about what it was like to go home for the first time?

Silas: Oh yes. It was wonderful. Mother was so happy, and she kept rubbing the soft spot on my chest. And then Father came home, and I was excited to see him, too. Even though he spoke in a strange way and seemed angry, just by the smells coming off of him I could tell he would love me. * looks at Ken lovingly * You have a shimmering about you, Father. One that shines through no matter how upset you become.

Heather: Ken quickly became more than just your owner, he became your friend. What do you like best about him?

Silas: Oh, I like many things about Father. I like his laugh, the way he scratches those hard-to-scratch places behind my ears, the warmth of his legs when I curl up between them. It all sends me to a joyous place, as if I was meant to be here with him all along. Even though it sometimes makes me anxious when he and Mother fight, and I grow angry, I know that they love each other just as much as they love me. All is forgiven a moment later, as soon as he looks my way and smiles. You know, miss book lady, I think that is what I like best about Father. His smile. It shows how much he cares about Mother, me, everything. I wish he would do it more often.

Heather: When you and Ken found yourselves in the parallel world, do you think Ken would have survived without you?

Silas: Maybe? I am not really sure. I guided him the best I could, leading him with my nose through the vast forests and wastelands before us, and I protected him with tooth and claw when needed, but I ended up having some…disadvantages later on, even though I didn’t know they were disadvantages at the time.

Heather: And Ken, do you think Silas could have survived in that world without you, especially considering what happened to him during the full moon?

Ken: You know what? I don’t think Silas gives himself enough credit. Sure, he went through…changes…when the moon came out, but he was still Silas. He still protected me, still showed no fear, still put himself in harm’s way when he shouldn’t have. The way he changed, changed me, changed the way I looked at life and love and family and happiness. Hell, I guess you could say it was all him. He gave me a reason to go on, to go forward, to want to get back home.

Heather: But would he have survived without you?

Ken: Okay, probably not. But I wouldn’t have survived without him, either. I guess you could say we became one, a symbiotic entity that, were we separated, would never have lived through it.

Heather: What’s the most surprising thing that you learned about each other as you made your way through the dangerous parallel world?

Silas: I learned that Father is capable of great things, that he can lift himself to huge heights to protect the ones he loves. He will do anything for me, or for the nice girls and boys we met, and never leave anyone behind. Though I guess I knew that before we went there, it just become more clear the longer we were away.

Ken: Well Heather, it was obviously a harrowing experience, one I won’t ever forget. And I came to the realization that Silas is more than just a dog, a mutt that can’t stop walking in circles, gets scared at rainstorms, and is constantly bugging me to play fetch with him. I discovered he’s a thoughtful, loving being, in many ways human, capable of as much compassion as anyone I’ve ever met. He’s as much a son to me as I think I’ll ever have, to be perfectly honest. I have as much to learn from him as he does from me. And I love him dearly.

Heather: Silas, is there anything that you would like to say to Ken before I take off the translating collar? It’s a prototype and I have to sneak it back into my lab before my coworkers notice that it’s missing. This kind of thing is obviously frowned upon. You aren’t official government test subjects.

Silas: I would. I just want to say that I will adore you forever, Father. You are my everything, the sun when it rises in the morning and the moon that lights the way at night. You are my best friend and mentor, and I’ll always be by your side for as long as you will have me there.

Ken: Oh, Silas, you’ll never not be by my side. To use a bad movie quote, you complete me, bud.

Silas: Thank you, Father. Though honestly, I don’t know what you are talking about.

Ken: Forget it. Long story. * turns to Heather * You want to know what else I’ve just learned? Dogs aren’t very good at picking up on pop culture references.

Heather: *Stares blankly, vaguely recognizing what Ken’s talking about* Um, yeah. Well, thanks for sharing your experiences and proving that there are some deep thoughts in those cute little doggie brains. And that maybe man and dog are each other’s best friends. But I still think cats rule.

Robert J. Duperre is a lover of literature in all its forms. Be it horror, fantasy, science fiction, literary fiction, or even romance, he delves into it all and relishes every minute of it. It is his desire to show this love of all genres by creating wide-reaching stories that defy classification, that can reach the widest possible audience.

Robert lives in northern Connecticut with his wife, the artist Jessica Torrant, his three wonderful children, and Leonardo the one-eyed wonder yellow Lab.

You can read more about Robert and his views and ideas by visiting robertduperre.com.

Would you like a chance to win a Kindle3?

Contest Info: Answer the question of the day in the form provided and you are entered in the Kindle3 Giveaway. Questions provide contestants the chance to choose one of two answers (questions center around a playlist of songs Rob put together for Silas). Contestants are awarded three points for the correct answer (one point for the wrong) with the chance to gather up to 45 entries by answering each question. Open US/Canada