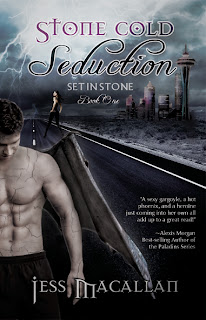 get  your own copy:
Amazon | Barnes & Noble | Books On Board | Diesel

When a regular night of Robin Hood-ery results in the manifestation of some, um, unusual paranormal abilities, perfume-maker Elleodora Fredricks realizes the normal world she lives in isn’t quite… normal. And neither is she, thanks to her father, king of the shadow elves. Not only is he evil incarnate and the reason Elle moonlights as a burglar-someone has to take care of all his victims-he’s stolen her memories.
And only reading her fate can fix that.
Good thing she’s got a trio of hotties willing to help her find said fate, but only if she gives them something in return. Saving her oracle BFF’s fiance, falling in love with the gargoyle, and making up for breaking the phoenix’s heart ought to be a piece of cake for the princess of the shadow elves.
If only the king didn’t want his daughter dead…

I had the chance to interview the author, so without further ado… :

Hi Jess, thank you so much for the opportunity to interview you and thanks for stepping by the Bewitched Bookworms today!
Jess: Thanks so much for having me here! I’m excited to chat with you.
• How did you come up with the idea for Stone Cold Seduction?
Jess: I love urban fantasy and paranormal books, but I really wanted to write something that didn’t involve vampires, werewolves or demons. Don’t get me wrong, I love reading about them, but as a writer, I didn’t have anything new to add to the mix. Gargoyles and phoenix have always intrigued me. I turned them into sexy alpha males and added elves and oracles (with my own twist). My creative process isn’t always organized, so this story and world building evolved on their own.
• Which character was most fun to write, why?
Jess: That’s a tough one, but I’d have to say Teryl. I can’t pick favorites, but he’s definitely the most fun to write because I love his personality. He’s witty, loyal, brilliant, and has a quirky style. He’s a secondary character, but he plays such an important role in Elle’s life that I couldn’t help but love him.
• Which character was most difficult to write? 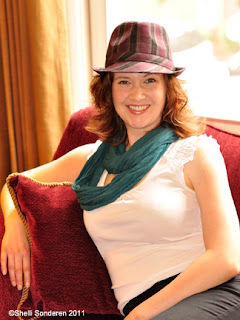 Jess: Elle’s father Jedren. It was easy to make him a bad guy, but it was difficult to create his motivation and heartlessness. As a reader, I’d love to see him killed off in the beginning. As the writer, I can’t make it that easy. Without giving away a spoiler, there’s one scene toward the end of the book I really wanted to kill him off and write, “The End.” I refrained, but boy did I hate him in that scene.
• There are many different mythical creatures in Stone Cold Seduction, which one do you like most?
Jess: Gargoyles. I want to get a life size pair to stand guard at the end of my driveway. *grins* I love the idea of fierce stone creatures who are strategically placed on buildings to guard the inhabitants from evil. Most people think gargoyles are hideous monsters, but their scary expressions were carved to instill fear in evil entities who might try to enter. I didn’t limit Jax to a building or make him ugly, but he’s very much a protector. Besides, gargoyles need love, too.
• If you could date one of the men in Stone Cold, who would it be?
Jess: I wouldn’t mind having my very own hawt gargoyle, though I have a soft spot for a certain fiery phoenix. There’s something about men with wings.
• Which authors or Paranormal series inspired you?
Jess: I have so many favorite authors that I could spend a week talking about them all. A few who automatically make it on my “To Buy” list are Sherrilyn Kenyon, Patricia Briggs, Karen Marie Moning, Ilona Andrews, Kim Harrison, Charlaine Harris, and Katie MacAlister. My book addiction is serious.
• Anything else you would love to add or share?
Yes, here’s an excerpt for readers to enjoy (and you can also see why I’d love a gargoyle of my own).

“You are my true mate.”
My lips were still tingling, and my brain was fuzzy. “Jax, I’m not sure what that means.”
He didn’t answer, but instead pressed a kiss to my temple. And another to my cheek. Slowly, he nuzzled his way to my neck. I let my head drop to one side, giving him better access.
He whispered his approval, and lightly nipped at my neck. “It is a connection between souls. A bond determined by fate. I will show you what it means.”
His lips and tongue were doing a slow, erotic dance along the oh-so-sensitive skin down my neck, and coherent thought was impossible. He could show me whatever he wanted, as long as he didn’t stop.
I sighed, and Jax took that as acceptance. Before I knew what he was going to do, he’d scooped me up and was halfway up the stairs.
“Jax!” I yelped.
He stopped, but his muscles were vibrating with energy. He waited until he had my full attention before repeating, “I will show you. We are mates, connected in ways you and the phoenix will never be.”
His silver eyes were bright and intense. I could admit to having had many, many fantasies where he’d carried me upstairs, and all sorts of amazing things had happened. But this was real. And he was dead serious. It scared me, thrilled me, and seriously confused me.
When I didn’t respond, he lowered my feet to the floor and pressed me up against the wall in the narrow stairwell. His eyes held mine as he leaned close. “I will show you, so there are no doubts.”
Then he kissed me again, and this time, he held nothing back. Possession, need, and barely leashed control. Jax’s mouth told me more than words ever could. He leaned against me so our bodies were in full contact. Need burned through me. His taste, his touch, drowned out my worries. His scent surrounded me. He smelled crisp and clean. Like a sunny, winter day. But the heat he created inside me was intense. Just like the man himself.

Thank you again so much Jess for your time!
Thanks so much for having me at Bewitched Bookworms today! I loved the questions. I enjoy chatting with readers, and can be found on  Facebook | Twitter | Goodreads | JessMacallan |
Seriously! I loved the answers from Jess and I started reading Stone Cold and …it started awesome!
What I love most are the many different paranormal creatures!
So, I have a giveaway for you!
Thanks to Entangled Publishing I can give away
1 eBook to
1 lucky winner!
How to enter?
Question:

Which mystical, paranormal creature to you love most?