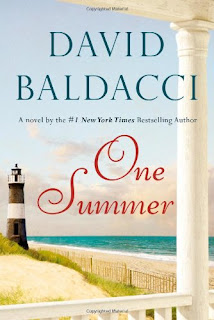 synopsis from the Publisher

With only a short time left to live, terminally ill Jack spends his last days preparing to say good-bye to his devoted wife, Lizzie, and their three children. Then, unthinkably, tragedy strikes again: Lizzie is killed in a car accident. With no one able to care for them, the chidren are separated from one another and sent to live with family members around the country.

Just when all seems lost, Jack begins to recover in a miraculous turn of events. He rises from what should have been his deathbed, determined to bring his fractured family back together. Struggling to rebuild their lives after Lizzie’s death, he reunites everyone at Lizzie’s childhood home on the oceanfront in South Carolina. And there, over one unforgettable summer, Jack begins to learn to love again, and he and his children learn how to become a family once more.

The funny thing -when I was watching this promo vid, I was thinking, “Uh, they must have screwed up the trailer because these are all his OTHER books.” And then at the end he says his little blurb. Totally true!

I’ve been a Baldacci fan ever since the beginning of the Camel Club, but the book that has always stuck out as a favorite for me was Wish You Well. Mainly because he broke from his suspense/killer sort of books and headed in the heartbreaking story about a family torn apart by bad luck and circumstance (hey….sounds familiar?)

My mother-in-law loaned me the book because she said it was really good, and she also suggested I had some kleenex near by. Let me tell ya – they were needed. Baldacci has this way of sucking his readers in. He’s great at the heartwarming family stuff, humor, suspense, thriller and even some hot smoochy scenes. You have to give a little to fiction and faith in this book – he doesn’t give a lot away on what the guy’s illness is and how he had a miraculous recovery. But I enjoyed reading on how he dealt with the illness, the love he had for his wife and family and trying like hell to live his life to the fullest after a major second chance.

So if you’re looking for a touching, uplifting book – this one is for you!

5 Responses to “Review: One Summer by David Baladacci”