The Chaos
by Rachel Ward
Published: June 7, 2010 in the UK, March 1, 2011 in the US
Links: IndieBound (find this book at your local bookshop!)
Amazon
(not yet available as Kindle or audioBook editions)
Book provided by Big Honcho Media for fair review
Synopsis from Goodreads

Adam has more than inherited his mother’s curse: When he looks in someone’s eyes, he not only sees the date of their death…he feels the searing, shocking pain of it. Since Jem died, Adam has lived by the sea with his great-grandmother, Val. But when rising tides flood the coast, they return to London. The city is an alien, exciting, frightening place. Most disturbing of all, Adam can’t help but clock how many people’s numbers are in January 2027; how many are on New Year’s Day. What chaos awaits the world? Can he and Sarah stop a catastrophe? Or are they, too, counted among the “twenty-sevens”?

Ever since I listened to the first book in this series back in January I’ve been wondering what came next for Jem and her son Adam. And as soon as I opened this book I was sucked back in. Unlike his mother, Adam grows up with someone who understands what he’s seeing and helps him to cope with the fact that he is essentially surrounded by reminders of the mortality of every single person he meets. But it doesn’t help that he’s clocked his own mother’s number and therefore knows when she’ll die, before he’s even 10 years old. Adam is left to grow up, much like his father, under the care of his Nan, a woman with subtle but still formidable supernatural powers of her own.

The Chaos opens with Adam and Nan still living by the coast in a much altered future England: a future where children are compulsorily chipped, the sea is encroaching on the coasts of England and things are veering a little too close to a 1984 version of the world than would make me comfortable. And like all losses of freedom, they came gradually until the inhabitants of London in 2027 don’t even seem to realize how much they’ve truly lost.

But Adam’s less concerned about civil liberties than he is about a girl at school, Sarah. She’s beautiful and damaged and as soon as he reaches out to her she’s suddenly gone. Their stories intertwine as he searches her and the world creeps closer to what Adam knows is an impending catastrophe, one that’s going to kill thousands of people, one that he suspects the government knows about but isn’t talking about.

The tension in this story never seems to let up, as Adam, Sarah and those around them are thrown from the frying pan and into the fire over and over. Still, I couldn’t help feeling like salvation was right around the corner. And I was really hoping it was! I loved these characters, so overwhelmed by their circumstances and still so doggedly determined to change their stars. I love how once again, Rachel Ward gives her readers a hint of romance but keeps it as a side element and not the whole focus of her story.

As for the ending, it took me forever to figure out what was going to happen, and I’ll admit that I only guessed because I had some spoiler information from the excerpt for the final book on Goodreads. So if you want to be COMPLETELY surprised, don’t read the descriptions for Infinity, the third and final book in this series.

The Chaos is another action packed, character driven book by Rachel Ward that had me skipping sleep in favor of reading just one more page!

As I said, this is the second book in a planned trilogy and the third and final book is scheduled to come out June 6th, 2011. I can’t think of a better vacation read than this! 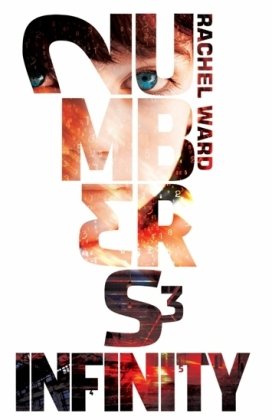 But before you can read Infinity, you have to read the first two novels!!

And Scholastic (via the lovely folks at Big Honcho Media) has given us a copy of both, Numbers and The Chaos, to give away so you can do just that!!! So, fill in the form below to be entered for your chance to get your hands on these fantastic books!! U.S.A. ONLY!

And for an extra entry into the contest don’t forget to let us know in the comments whether or not you’d want the ability to read someone’s death date…it does have some advantages….*shudder* « Review: Truth & Dare edited by Liz Miles
And the winner is…. »

42 Responses to “Review and Give-Away:The Chaos by Rachel Ward”