*squeals in excitement*
Today my friends, I want to share something absolutely awesome with you.
I had the pleasure to meet Derek and Lucas,
the two boys that both want to win
Kylie’s heart..
Not sure what I’m talking about?
Check out my Review here.
Born At Midnight
available for pre-order at amazon ( Kindle, Paperback) goodreads:
Release: 29th of March!

So let’s get going with the fun:
Hey boys *blushes*, glad you had the time to come here and answer some questions. … and please guys, behave yourself while you’re here…


YOU FOUND THE EGGG (although you can’t see it right now)
CLICK TO ENTER!!!

Let me start with an easy question for both of you, how would you describe Kylie? Just tell us how you see her with your eyes…

“First, if there are any behavior problems, it’s won’t be on my end,” Derek says with a smile. “My kind isn’t known for being trouble makers.”

Derek continues, “If you really want to know more about how I see Kylie, you might want to go over to C.C. Hunter’s website and read the scene written from my point of view. It won’t be up until March 29th, though – C.C. Hunter is holding out until Born at Midnight’s official release. But here’s the link to the Special Content page.

“There’s actually one from my Point of View, too,” Lucas says. “As you probably know, Kylie and I have a history.”

Derek ignores Lucas and continues talking. “But to answer the question, I know what you expect me to say. That’s she’s hot. And she is, but . . . well, her looks aren’t all that she’s got going for her. She’s . . . different and special. She feels more, and cares more deeply about everything. I know because I can read her emotions. I feel what she feels. We share that special bond. So I understand her. More than most people,” he adds and cuts a quick glance back at Lucas.

“So you can really read what she feels?” Lucas asks. “Interesting. So tell me, how does she feel about me?” His gaze is bold as if he’s sure about where he stands with Kylie.

“Honestly?” Derek just stares at Lucas, as if hiding his own emotions. “You scare the shit out of her. That’s how she feels.”

Lucas tucks a hand into his jeans and just a bit of his confidence seems to fade. “Maybe in the beginning but I think that’s changed,” He says and pauses for a moment before continuing. “As for how I would describe Kylie, that’s easy. She’s like an angel. Always has been. I knew her when she was six and she was even beautiful then. She’s also a puzzle. Not the kind that drives you crazy, but the kind you just keep coming back to because, more than anything, you want to figure it out. And yeah, maybe she’s is a little scared of me, but deep down she knows that I’d do anything to protect her. Anything.”

Okay…I think we should move on. Derek, how do you like being at Shadow Falls?

He hesitates for a few moments. “Well, honestly, I was dreading it. But when I met Kylie, that changed. Everything changed.”

Lucas rolls his eyes. “Give me a break.”

“We share a bond, like I said.” Derek shrugs. “Of course, it’s not something I would expect a werewolf to understand.”

Lucas scowled but doesn’t say anything.

And, if you’d have the choice, Derek, would you rather be normal instead of being a Faerie *oppps* sorry – I mean Fey..

Derek frowns. “I had my reasons for not really wanting to be a Fae. But they’re personal. After being at Shadow Falls, things have changed, like I said. I’ve changed. I think Shadow Falls changes everyone in one way or another. Now, I see the good I can do with my gifts. As a matter of fact, my gifts actually saved Kylie’s life.” He cuts his eyes at Lucas again.

Why should Kylie choose you instead of Lucas?

Derek continues to look at Lucas. “I think Kylie will eventually see who she needs to choose. Look,” he says, “it’s not even about one of us being better. It’s about who’s right for her. And with my ability to know her feelings, let’s just say that gives me an edge. I share her emotions and I can be there for her.

Lucas, thanks for your patience while I was talking to Derek… So, how is it for you being a Werewolf?

His dark brows pinch a little. “How is it?” The question seems to have frustrated him, or maybe it was Derek’s last remark. “It’s normal. I’ve never been anything but this. I mean, I could ask you how it feels being human. Would you be able to explain it?” He pauses. “Yeah, I know some people think we’re anti-social. We’re not. We just care deeply about those in our circles, those in our packs. A guess you could say we’re selective about who we let get close. But what’s wrong with that?”

“A hell of a lot is wrong with it,” Derek says.. Then as if realizing he’s interrupting he says, “Sorry. .”

What kind of girl do you like? What does a girl need to have to catch your interest?
(maybe you like blond girls *blushes* ?!)

Lucas arches a brow, and looks a tad embarrassed by the question. “Well, Kylie caught my interest. She’s blond. But as much as I hate admitting it, Derek’s right about her being special. It’s more than just her looks. It’s who she is and I think that’s what attracts guys. Okay, sure a pretty girl will catch our eyes. We’re males and that’s normal, but it’s not going to keep us interested too long if there’s not something more.”

Last but not least: Why should Kylie choose you?

“Because as much as Derek would like to think he understands her better, it can’t compare to how Kylie and I share a past. We met years ago, and we bonded. I’ve never forgotten her, never stopped looking for her in a crowd of people. And now that I found her again, I’m not . . . Let’s just say that I won’t go down easy. Sure, if Kylie chooses him, I’m not going to beg. Werewolves don’t do that. But I don’t think I have too much to worry about.”

Thanks boys for your patience, I appreciate your time and…. *clears throat* ..uhm Lucas?
I always wanted to feel if a werewolf’s fur is soft.. would…. you ..uhm ..maybe shift and *blushes* let me touch your fur???

Lucas raises a shoulder and a slight smile appears in his eyes. “Not that I’m not flattered, but it might be safer to pet the fairy over there?” Lucas glances at Derek who doesn’t look happy. “You see,” Lucas continues, “when I turn, I’m not as sociable as I am in this form. Besides, I wouldn’t want to hurt my chances with Kylie.”

*squeals again*
Wasn’t that pure wonderment?
Gosh and I can tell you those boys are both HOT!
But of course I’m sad I didn’t had the chance to pet Lucas…
*faints*

Ok and I have one more awesomness to share!

You can win a copy of
Born At Midnight!
and it gets even better, it’s international!
All you have to do is fill out the form below and
get an extra entry for tweeting

and answer me this question:

What would YOU ask Derek or Lucas?

and just out of curiousity: 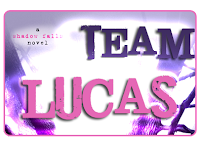 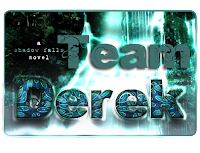 as usual, feel free to grab them !! click to get them in full size!
and I realized later that I didn’t stick to my own color coding.. *rolls eyes at self*
but the cover with the wood is soo Lucas for me, while the cover with the waterfall
is so Derek…

One one more thingy to share,
Check out the Prequel:
Turned At Dark
by C.C Hunter
goodreads
available for free
amazon

annnnnd…
a big thanks to C.C. Hunter for letting Derek and Lucas
come over here and answer patiently all my silly questions!
(visit her website to join the awesome contests she runs)
annd last but not least
thanks to Eileen for..
she knows why *winks*
Happy Friday my friends!