hy72ir6n49g5z831meqb Secrets to the Grave Contest and Review • Bewitched Bookworms 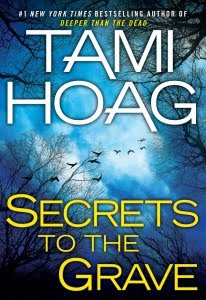 Secrets to the Dead (Deeper than the Dead Book #2) (Goodreads, Amazon (hardcover, kindle)

#1 New York Times bestselling author Tami Hoag returns with her second thriller in the Deeper than the Dead microseries, exploring the early days of forensic investigation, the characteristics of innocence-and the nature of evil.

Marissa Fordham had a past full of secrets, a present full of lies. Everyone knew of her, but no one knew her.

When Marissa is found brutally murdered, with her young daughter, Haley, resting her head on her mother’s bloody breast, she sends the idyllic California town of Oak Knoll into a tailspin. Already on edge with the upcoming trial of the See- No-Evil killer, residents are shocked by reports of the crime scene, which might not have been discovered for days had it not been for a chilling 911 call: a small child’s voice saying, “My daddy hurt my mommy.”
Sheriff’s detective Tony Mendez faces a puzzle with nothing but pieces that won’t fit. To assist with his witness, Haley, he calls teacher-turned-child advocate Anne Leone. Anne’s life is hectic enough-she’s a newlywed and a part- time student in child psychology, and she’s the star witness in the See-No-Evil trial. But one look at Haley, alone and terrified, and Anne’s heart is stolen.

As Tony and Anne begin to peel back the layers of Marissa Fordham’s life, they find a clue fragment here, another there. And just when it seems Marissa has taken her secrets to the grave, they uncover a fact that puts Anne and Haley directly in the sights of a killer: Marissa Fordham never existed.

After finishing Deeper Than the Dead (my review is here), I immediately cracked open Secrets to the Grave. Picking up about a year after the events in Deeper Than the Dead, a young mother is found brutally murdered with her barely hanging on 4 year old daughter resting on her mother’s shoulder. It soon becomes clear that the murderer was someone that Marissa Fordham knew and Detective Tony Mendez, along with ex-FBI profiler Vince Leone, start to dig through her life to find the evil doer. Ex-schoolteacher turned children’s advocate, Anne Navarre, has married Vince and takes temporary custody of the young girl. Suffering from the effects of her own vicious attack by the See-No-Evil killer, Anne helps the little girl deal with her mother’s death and tries to cope with the repercussions of her being the only living witness to the murder.

As in the first book of this series, Secrets to the Grave, Tami Hoag crafts a fast paced page turner full of action and emotional turmoil. The list of suspects is narrowed down over the course of the book and kept me guessing until the big reveal towards the end of the book. Since the book is set in 1986, the forensic techniques and budgetary restrictions for the police are a huge hindrance to the detectives. Little bits of what it was like to live in the time of no cell phones and DNA evidence in it’s infancy add to the emotional ride.

I loved that the players from the first book returned for book two, both minor and major characters. Book lovers who aren’t a huge fan of thrillers will still enjoy this book with the realistic characters, vivid scenery, and emotional circumstances the characters have to deal with. Tami Hoag weaves an intriging tale focusing on a tight knit community where everyone has secrets. I give this book a five out of five. One of the best series in the thriller genre and I can’t wait for book 3 in this series.

A copy of this book was provided by the publisher and TLC Book Tours. My review was in no way affected by the complimentary nature of the book.

TLC Book Tours and the publisher have generously offered to give away a copy of both Deeper Than The Dead and Secrets To The Grave to one commenter. The contest is open to US/Canada residents only (no P.O. boxes). Just comment below and leave your email address. One lucky winner will be picked at random. The contest closes at 11:59 pm CST on December 27, 2010. I really enjoyed these books and I know you will too.

A big thank you to TLC Book Tours for letting the Bewitched Bookworms take a part in Tami Hoag’s blog tour for the release of Secrets of the Dead and generously providing a copy of Deeper Than the Dead and Secrets to the Grave. The Fury by Claudia Lefeve 24 Responses to “Secrets to the Grave Contest and Review”