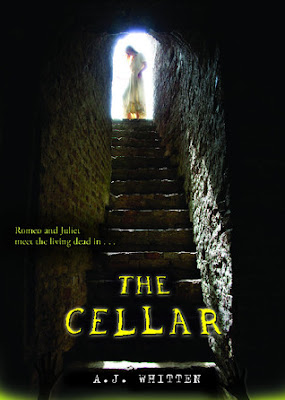 Description (From Amazon.com):
Meredith Willis is suspicious of Adrien, the new guy next door. When she dares to sneak a look into the windows of his house, she sees something in the cellar that makes her believe that Adrien might be more than just a creep—he may be an actual monster.

But her sister, Heather, doesn’t share Meredith’s repulsion. Heather believes Adrien is the only guy who really understands her. In fact, she may be falling in love with him. When Adrien and Heather are cast as the leads in the school production of Romeo and Juliet, to Heather, it feels like fate. To Meredith, it feels like a bad omen. But if she tries to tear the couple apart, she could end up in the last place she’d ever want to be: the cellar. Can Meredith convince her sister that she’s dating the living dead before it’s too late for both of them?

My Thoughts:
When I came across this title on NetGalley last week, the description seemed interesting so I thought I’d give it a shot. So I continued my forray into the young adult horror world (started with Hunger a few weeks ago).

Sisters Heather and Meredith are still hurting from the accidental death of their father, but each in their own ways. Extrovert Heather, who was in the car accident with her father, turned inward and stopped participating in drama club as well as dumped her boyfriend. Meredith turned into the glue that holds the family together. While their mother shops away her grief and their aunt and her twin sons move into the same house, life certainly isn’t the same for anyone.

When their mother rents out the dilapidated Victorian house next to theirs, a handsome and mysterious boy shows up at school. Every girl there falls under his mysterious spell, except for Meredith. A little spying expedition between Meredith and one of her best friends leads to some disturbing facts about pretty boy neighbor Adrien. It is revealed that he and his “mother” are zombies, and when he sets his sights on making Heather his new companion, Meredith must do anything she can to stop a zombie onslaught that could destroy the entire town.

The zombies in this book aren’t your standard shuffling along, not thinking or communicating zombies. They are in the vein of Haitian voodoo zombies and it’s interesting to see ones that can act like normal everyday people. But they do have to replace their host bodies as they decay.

I give this book a 5 out of 5. It’s a very interesting and fast paced read. Plus it’s a little gorier than most young adult fare. 2 Responses to “Review: The Cellar by A.J. Whitten”