For all of you who tuned into our last episode of cutie’s corner,
‘aka the place where randomness (& rambling) reigns’
y’all know I confessed that I am a book hoarder,
and I did so solemnly swear that whilst I would not
stop buying books nor stop borrowing them from the library,
I was bound and determined to knock down my current stack
of books to nothing by the end of this year.
Can we all say: Failure is emanate?
*nods head yes*
So, I know, all of you,
yes, even you in the back with the eyes,
have been unable to sleep since my last post!
Each night, you toss and turn, fretting over
whether or not I am going to obtain my goal.
*comes to a screeching halt*
How about I stop rambling on and start reviewing a few books
I read from my last cutie’s corner to read list?
What do you think?
Yep, that’s what I thought.
Here are 5 books I read: 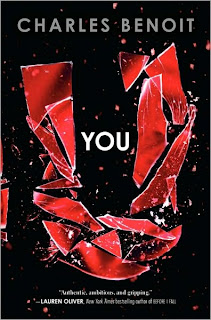 Written in the second person point of view,
You lives up to its title.
At first, the use of the pronoun you instead of me,
I, she, or him is off putting, and hard to get use to.
But the discomfort only lasted briefly
and soon I was immersed in the world of Kyle Chase,
a sad, scared, and lonely boy who just wanted
someone to listen to him, to care, to see that he was dying inside.
I highly recommend this novel.
I was stunned and in tears when I shut it,
and haunted by it for days. 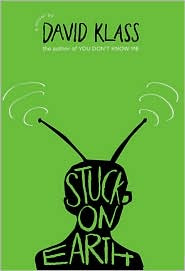 On the surface, this is your average SciFi-cliche:
peace loving alien comes to Earth and learns that we ain’t so bad.
But the real story, in my mind, is Tom’s.
A boy who has been torment, abused, and mocked his whole life.
A boy that doesn’t seem to fit in.
Who is called Alien by his peers.
Who just might be escaping from reality.
And that’s where the lines blurred for me,
and this seemingly simple straight forward story
became something more.
And, I must admit, just like Ketchvar,
I’m not sure what this book’s reality was.
Frankly, it makes me adore the story even more.

his plot’s twists and turns kept me from putting the novel down,
his characters’ growth were heartwarming,
and while the story tackled some common themes,
(abuse, broken families, environmental issues, bullies, etc.)
it was done in a witty and interesting way. 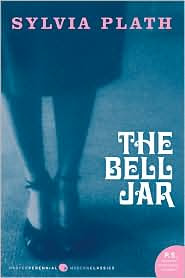 An absolutely beautifully written novel,
and not at all pretentious or overly poetic,
as some might assume a book written by a poet might be.
I will admit, I did not connect completely with Esther,
as at times I found her to be extremely selfish,
but overall, I adored this novel and I am so glad I
finally picked it up. It’s been sitting on my
bookshelf for well over two years! 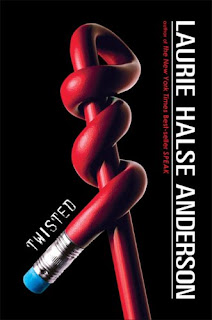 of an awkward and geeky boy becoming a man in his own right.
Beautiful, poignant, corky, sarcastic, and witty
are just a few words that could be used to describe this book.
From page one I fell in love with Tyler
and truly cared about him as a person.
The character development was beautiful.
The plot line twisted and turned beautiful toward an
extremely satisfying ending. Overall –
Twisted is a fantastic novel.
Annnd I might have a small crush on Tyler.
*blushes*
My Bewitched rating: 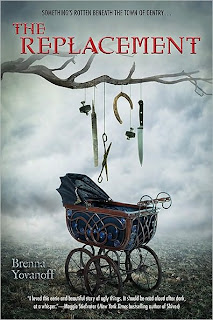 Okay….
I was disappointed in this book.
I know… I hate saying that, but I was.
Good points:
The premise is outstanding.
The setting is an awesomely creepy mixture
of Neil Gaiman’s The Graveyard Book &
the movie The Nightmare Before Christmas.
And the main character, Mackie, is adorable,
and truly grows as a character.
Why am I not head over heels in love with this book?
I spent most of the novel in complete and utter confusion.
It is one thing to be mysterious.
It is another to be entirely vague.
The story is so ambiguous that I become distracted,
and I could not lose myself in it.
Truly, I’m still not even sure what Mackie is or what was going on.
Top that off with the fact that I couldn’t stomach his love interest (Tate),
and we get one very befuddled and frustrated cutie.

In conclusion:
1. My “current” stack of books was 64 (give or take).
2. I have read roughly 15 books
(only two of which weren’t in the original stack).
3. This is boring you to death, and I lost you at hello.
4. I am listening to You Shot Me Down by Nancy Sinatra.
5. Dracula by Bram Stoker is sofa king awesome.
You should read it for All Hallows Eve.

Until next time –
b to the y that means: buh-bye.
Yours truly,