hy72ir6n49g5z831meqb Review Eternal Kiss of Darkness and why we love Mencheres! • Bewitched Bookworms

It’s no secret Heather and me are big fans of Jeanine Frost and her Night Huntress world. (Me, after I finally listened to Heather who told me those are a must-read!!!) We adore her and especially Cat and Bones. Believe us girls, Bones is one of the hottest Vamps in the fiction world out there… *swoooon* So there was no question that we would read her books about the secondary characters that appear in the Cat and Bones books. Heather reviewed First Drop of Crimpson, the story about Spade and his mate and today we are going to talk about her newest book Eternal Kiss of Darkness featuring Mencheres…
Eternal Kiss of Darkness
July 2010
amazon
(available as Kindle edition)
goodreads
We both own this book! 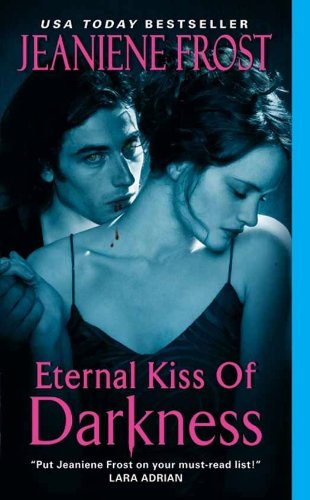 obviously not up for the best cover award…

An immortal war has been brewing in the darkness…and now one woman has stumbled into the shadows.

Chicago private investigator Kira Graceling should have just kept on walking. But her sense of duty refused to let her ignore the moans of pain coming from inside a warehouse just before dawn. Suddenly she finds herself in a world she’s only imagined in her worst nightmares.

At the center is Mencheres, a breathtaking Master Vampire who thought he’d seen it all. Then Kira appears—this fearless, beautiful…human who braved death to rescue him. Though he burns for her, keeping Kira in his world means risking her life, yet sending her away is unthinkable.

But with danger closing in, Mencheres must choose between the woman he craves, or embracing the darkest magic to defeat an enemy bent on his eternal destruction

When I read that the next book would be about Mencheres I wasn’t so thrilled to be honest. I was like “uhmmm, but why? I would love reading Ian’s or Vlad’s story why him???”

But Oh Boy I was wrong. I LOVED this book!

It was so much better than First Drop of Crimson and it truly can compete with Cat and Bones (although they will always be my favorites).
Once I started I couldn’t put it down, I was fascinated by this really REALLY old Vampire, who had so much to suffer with the bad choice of his last wife. He’s such a sad character but inside his heart so unbelievably loyal, caring, and lovely. I even found myself being angry with Cat and Bones ( and I ADORE those two) about how they are so mean to him sometimes.

Mencheres is an ancient ( and I mean really ancient) Vampire who is the Sire of Ian and the grandsire of Bones. He’s around 4000 years old, I mean take this girls! 4000 years is like… uuhmm really really old! Plus he’s extremely powerful!!! So don’t screw with him…

What did change my mind?

Truly, after reading the book I’m the biggest Mencheres fan! He’s so lonely and sad, it broke my heart! *sniffles*In this book you get to know Mencheres so much better and you start to understand why he did what he did with Cat and Bones. I promise, after you’ve read the book you won’t be angry with him anymore!!!

The whole story is about Mencheres coming back to “life” and finding a new love and it’s such a wonderful story. Kira was an awesome heroine as well and the perfect match for Mencheres. I admired her right from the beginning, she’s not whiny and also is not easily to freaked out! I loved that. Normally such characters that are humans and get to know about Vampires often are freaked out just to get more drama.But not Kira, she’s tough and smart and analyses the facts before judging. This is what I loved most about her.

The connection between those two are powerful, and the plot was fast paced, full of action and love. And certainly we get some steamy hot scenes!

Heather:
I found myself preordering Eternal Kiss of Darkness just because Jeaniene Frost wrote it (and everything she writes is golden in my opinion), certainly not because Mencheres was my favorite side character (That award goes to Vlad, sigh). In the Night Huntress books, the interactions that Cat and Bones have with Mencheres over the course of 4 books don’t exactly paint him as much of a nice guy. He is very cold, calculated, and pretty emotionless.
Within 5 pages of Eternal Kiss of Darkness, you get such a bigger picture of what kind of man Mencheres really is. He’s sick of dealing with a decades long feud with his uncle and is still dealing with the guilt of setting up his wife’s murder (even though she was super evil). So he’s trying to handle things in a very noble way, only to be twarted by private investigator Kira.
Kira is smart, strong willed, and very resourceful. She does something that no one has ever done for Mencheres: try to save him with no agenda of her own. When she is injured while helping him, Mencheres holds her captive (a very free, luxurious kind of captivity btw) while he waits to be able to make her forget everything she saw. But Kira’s mind turns out to be resistant to his will and she is eventually let go. But neither Kira nor Mencheres can forget about each other. She is the first person to show interest in him without knowing how powerful and influential he is, and his years of forced celibacy since his wife was still alive have taken their toll.
Kudos to Jeaniene Frost for so going their when Kira had to be punished for trying to steal someone’s human. This is the first vampire book that I’ve read in a long time that deals with the events Mencheres jump starts by having to punish Kira as well as showing how well Kira can adapt.
What I loved: Mencheres is so thoughtful, sensitive, and deep. You can really see why he acts the way he does since his back has been against the wall for centuries. Kira is such a loyal, loving person who will stop at nothing to take care of her family and loved ones.
What I didn’t love: There seriously isn’t anything I didn’t love about this book. Oh wait, Bones is kind of an asshole in this book. But it’s pretty necessary for him to be this way so I went with it.
Final addict
We both loved this book and if you are a fan of the Night Huntress series you need to read this book. Even if you are not a big fan of Mencheres before, you will be after reading this book! No less than 5 bookies!

6 Responses to “Review Eternal Kiss of Darkness and why we love Mencheres!”