Twice Bitten is the third book in the Chicagoland Vampires series written by Chloe Neill. Heather has previously reviewed the first two books in the series. If you still haven’t picked them up after reading the review, then it’s time to start reading them now. 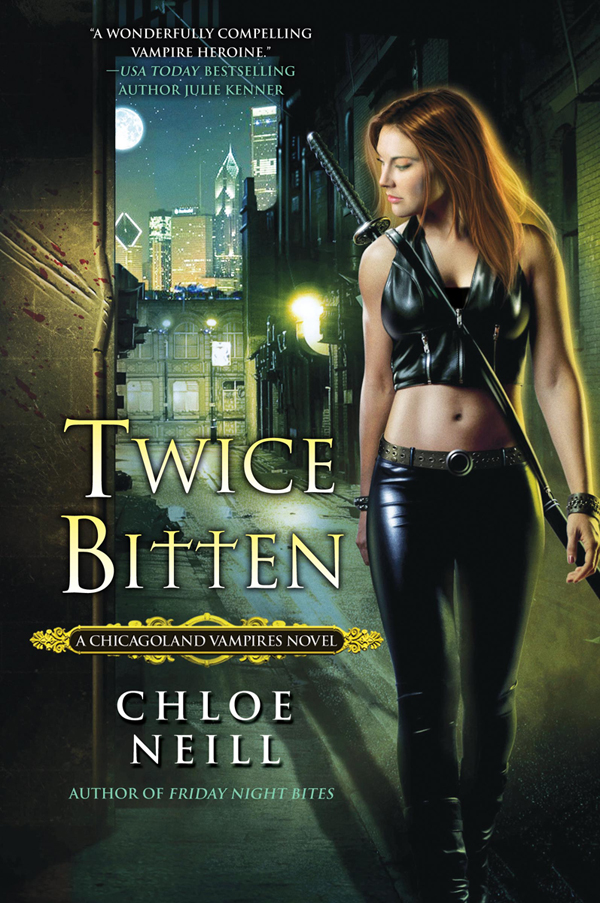 Merit, Chicago’s newest vampire, is learning how to play well with others. Other supernaturals, that is. Shapeshifters from across the country are convening in the Windy City, and as a gesture of peace, Master Vampire Ethan Sullivan has offered their leader a very special bodyguard: Merit. Merit is supposed to protect the Alpha, Gabriel Keene—and to spy for the vamps while she’s at it. Oh, and luckily Ethan’s offering some steamy, one-on-one combat training sessions to help her prepare for the mission.
Merit must accept the assignment, even though she knows that she’ll probably regret it. And she’s not wrong. Someone is gunning for Gabriel Keene, and Merit soon finds herself in the line of fire. She’ll need all the help she can get to track down the would-be assassin, but everywhere she turns, there are rising tensions between supernaturals—not least between her and a certain green-eyed, centuries old master vampire.

Danny: Without taking away too much from my review, Twice Bitten is definitely the best book in the series so far. It includes everything you need in a good book: romance, heartbreak, friendship, action, magic and a strong main character.
The Characters:
Merit is going through a major development in the first two books and in Twice Bitten, she finally accepts her new Vampire nature. It also seems like a lot of tension is missing and I like this new Merit so much. She’s strong and loyal and this is what I loved most in this book. Merit has to make an important decision whether to also fully accept Ethan and stay loyal to him and to the house.
I think the most drastic character development was seen in Ethan. While he was very distant in the first two books, we see so much more from him in TB. And I can say I loved what I’ve read. He starts to open up. However, I was so pissed at him much more than in the first books, but this is what makes this book so extremely good. We suddenly get so much emotion, from both Ethan and Merit. It was a pleasure and so much pain to read. Ethan definitely has so much “swoon” potency but at the same time so much ” I wanna kick your ass” potency. But I love this, it makes the book much more exciting to read.
Mallory and Catcher were there but way too little appearance for me. I love those two character and it made me extremely sad that Merit and Mallory had this big fight in the last book.
In addition new characters were introduced: The Shapeshifters. Chloe definitely portrayed them in a great way and I truly enjoyed this magic portrait of Alpha males, family and magical shape shifters!!
The Plot:
The plot develops really fast forward in this book and it made it impossible for me to put it down, so I read it in one day. The book has a great pace, so much is happening! There is the plotline with the shapeshifters, who still try to hide themselves from the human world and are afraid of being “outed”. But, since the Vampires have received very bad press lately, they want to form a union of all the magical creatures and the big question is : What will the Shapeshifters decide? Hide or stand beside the Vampires?
Then we have the big big biiiiggggg tension between Ethan and Merit and as devoted fan of this couple I enjoyed this part so much!! The tension and connection between those two made me “swoon” and drool. I won’t give away much, but all I’m saying is “Watch out for chapter eight! and then go and thank Chloe for this chapter!” It’s called “Hungry Eyes”
(now I go and read it again … *cough* )
Apart from that, there are some greatly placed cliffhangers and innuendos about further development that makes you want to read the next book like now. There is room for a lot of speculation. Some of the Shapeshifters can apparently get glimpses of the future and Merit get’s to “see” one of them that involves her and…. I can’t say more but it makes the time until we can read the next book way too long.
Heather:
Like Danny, I was very excited to get this book. Merit is a very likeable main character. She is smart, witty, loyal, and sassy. In this third installment, Merit is finally getting comfortable in her vampire skin and her role as Sentinel for Cadogan House. Her will they/won’t they relationship with her maker and head of Cadogan House, vampire Ethan, continues in this book. But, like Danny said above, chapter 8 will change everything. And then Chloe Neill will make you mad not soon after that.
The main story throughout Twice Bitten is whether or not the Shapeshifters, who are underground and not known to many humans to exist, will stay underground in the States or pack their bags and head for their Alaskan homeland. Merit and Ethan are brought in to help guard the alpha Shapeshifter, Gabrielle, while the shapeshifters meet to discuss the future. Of course someone is out to get Gabrielle so Merit and Ethan are thrust into the line of fire almost immediately.
What I really loved: Merit’s maturing as both a vampire and a person, her evolving relationship with both Ethan and her best friend Mallory, the insight into Ethan’s character and how he is changing since Merit has been in his life.
What I didn’t love: I really miss the original model on the cover. They used a different girl for this cover than they used for both Some Girls Bite and Friday Night Bites. Hopefully they can get the original model for book four. Merit’s grandfather, shapeshifter Jeffrey, sorcerer Catcher, and new sorceress Mallory were barely in this book. I know that this book was really about Merit and Ethan, but I really missed those characters.
Our Final Verdict:
Danny and Heather love this book and think it definitely deserves 5 stars since it’s the best book in this series so far. We just hope that Chloe gets a new contract for more books. At the moment she has a contract for 4 books and depending on the sales numbers she hopefully gets a new contract by the end of the year. We need to get more books!

Please, don’t forget to read our interview with Chloe Neil and enter our giveaway
where you can win a
signed copy of Twice Bitten
and a
TB Swag Bag,
contest ends on Sunday so hurry up!!