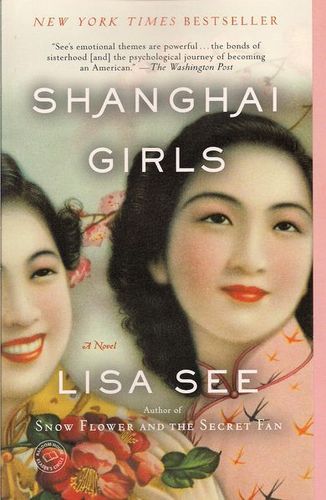 I’ve been in love with China ever since I read The Joy Luck Club by Amy Tan. Just something about its history and its culture (not to mention its food! yum…) has always fascinated me, but since my humble teacher’s salary doesn’t exactly allow me to fully satisfy my wanderlust, the only way I’ve been able to explore this magnificent country is through the written word.

After tearing through everything in Tan’s catalog (my favorites? The Kitchen God’s Wife and One Hundred Secret Senses), I was hungry for more. So I went hunting, and one of the authors who immediately caught my attention was Lisa See. What drew me to her was the fact that she was a hybrid, or a “mutt,” as she calls herself. This is something I can relate to as the daughter of immigrant parents. Even though I was born and raised in America, I often feel like I’m straddling a fence between two cultures, the one of my birth and the one of my family.

This idea of straddling a fence between two cultures is at the heart of Lisa See’s newest novel, Shanghai Girls. The push and pull of one’s culture, especially when it is from a country other than your home, can be a powerful force. You can learn English as a secondary language, you can learn to chew bubble gum and say “yeah” and “dude” all you want, but your blood will always speak another language.

Synopsis. Shanghai Girls follows two sisters, May and Pearl, as they lead their whirlwind lives as beautiful, cultured, and fun-loving young girls living in 1930’s Shanghai, China. The first part of the book is positively thrilling. It’s as if these girls are living in a glittering bubble. But just as bubbles are superficially eye catching and exhilarating, they are ultimately insubstantial, too. The sisters’ “bubble” bursts when they learn the devastating news that their father has gone bankrupt. Even more devastating is the revelation that he has arranged marriages for them in the hopes of recouping both his financial and social losses. And the marriages are to “Gold Mountain” men, Chinese-Americans who are looking for Chinese brides to bring back to Los Angeles. When the two sisters leave China and arrive at Angel’s Island, they are detained for months on end, forced to live in a miserable limbo of an existence, missing their homeland yet unable to put down roots in their new home. Matters are further complicated when May discovers she’s pregnant, and this leads the sisters to make a secret promise to each other that will inevitably test their seemingly unbreakable bond as sisters.

High Points. What I liked best about the novel was the way the relationship between May and Pearl is conveyed. I don’t have a sister, personally, so I can’t speak for myself, but I will say their relationship felt true to life. You get a sense not only of their deep bond, but also of their insecurities and petty jealousies, their hidden hopes and desires. Lisa See is great at crafting characters who are multidimensional, and she excels at this here, especially with Pearl. As is the case with most of See’s novels, she allows us to share cabin room inside the head of one of her main characters (here it’s Pearl), and as Pearl is the outwardly more reserved of the two sisters, this makes for some interesting character development. The maxim, “Still waters run deep,” especially holds true here.

Low Points. One of my pet peeves about Shanghai Girls is a complaint I’ve had for her other books as well — See’s penchant for the melodramatic. In almost all of her books, she winds up ruthlessly killing off a major character, often in a cliffhangery, “gotcha” kind of way that just seems forced. It never feels of a piece with the rest of the plot, and I’m sorry to say she makes the same misstep in this novel. Had See been more reserved in her plot development and not so keen on leaving her reader with such a melodramatic cliffhanger of an ending (sequel much?!), I may have been inclined to give this book a higher rating. My final verdict?

Still, however disappointing the ending, this book’s strengths — its powerful character development and haunting themes of love and loss — are such that its melodramatic ending doesn’t do much to diminish its good traits. Will I buy the second book when and if it comes out? Most probably. To See’s credit, she made me care about her characters enough that I want to know what happens next. But — and this is a big but — I hope and pray that part two leaves the melodrama behind and focuses on the characters.
If this book sounds up your alley, you might want to check out Lisa See’s two other novels: Snow Flower and the Secret Fan and Peony in Love. They are both very similar to Shanghai Girls in their romanticized view of China and their sweeping sense of romance — as well as, unfortunately, their flair for the melodramatic. But if you don’t mind a little melodrama with your romance, then check out Lisa See.
Click here to see an excellent video on Amazon about Lisa See and Shanghai Girls! « Review: The Forest of Hands and Teethand The Dead-Tossed Waves
It’s Friday and that means we do the Blog Hop again … »